Home Bestar and its community

Bestar and its community

The second edition of the “Tour du lac Mégantic” run, initiated by the Notre-Dame- de-Fatima school, took place May 6 th , in beautiful sunny weather. In total, 62 young runners wearing orange shirts and accompanied by responsible adults took the start at the school at 7:30 in the morning.

They ran a 55 km relay race and were followed by a bus carrying the runners at rest. The activity was organised by Sylvie Roy and Félix Guèvremont and was part of the Energy Cubes Challenge of the “Grand Défi Pierre Lavoie”.

These young people have surpassed themselves through this extraordinary and unforgettable experience, recognize the organizers.

Coach Félix Guèvremont, along with Sylvie and Caroline Pelletier, prepared the students for this challenge by offering them training twice a week at lunch break throughout the month of April. We would like to thank the runners who have accompanied the students: Éric Lavallée, Tommy Gagnon-plant, Andréa Jacques and Lyne Poulin. Big thanks also to Tommy’s dad who followed the group on his bike to provide first aid if necessary.

We would also like to acknowledge Caroline Pelletier, who participated in the project by supporting the kids during their training and their run, Jacques Beaudoin, who was driving the vehicle in the front, Jessie Dulac, for the photos, and the bus driver for his great patience.

Finally, let us mention the collaboration of the school principal, Éric Croteau, as well as the help from Bestar and Multicopie, two local businesses who offered complimentary shirts to the runners. 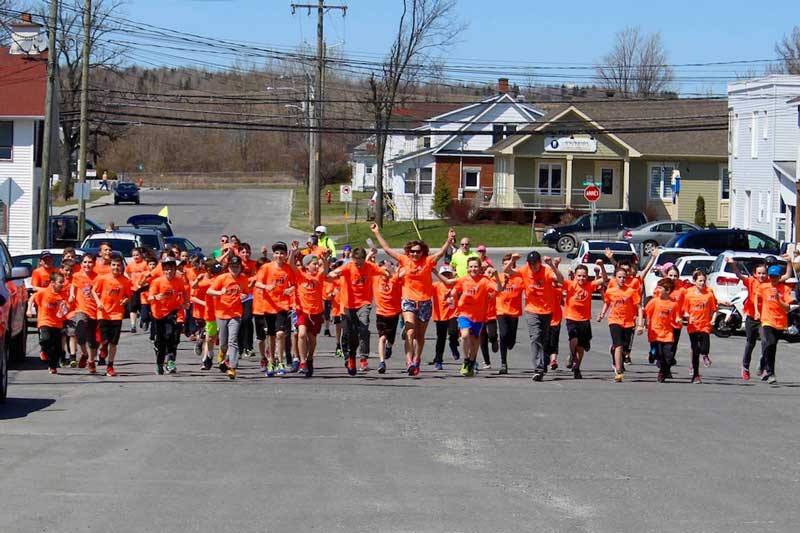 In 2010, Bestar made a point of supporting the community by sponsoring the celebrations of Lac-Megantic’s 125th anniversary. This sponsorship helped to support the activities planned throughout the year. The theme for the 125th anniversary celebration was to establish a link between the past and the future. Therefore, the program combined festive events and added-value community projects, such as the development of a hiking trail.

Through nature, video games, fashion, cooking, princesses, reading, traveling, photo, animals, circus, love, dance and of course sports, all these young people delivered an excellent show. Congratulations to the five coaches who have devised and taught all these numbers.
Congratulations to the many volunteers who have worked for this show to be a success. Note the involvement of three of our employees who gave their time by volunteer.

Following the tragic events of 2013, Bestar reorganized its workforce to make room for some of the local companies, which had to relocate their activities temporarily.

Being part of the major companies in the Granit MRC region, Bestar considers that it is important to support and implement local projects. Bestar is proud to support Ducks Unlimited Canada, an organization dedicated to the conservation of wetlands for over 70 years.

Contribution to the sports center

In 2011, Bestar continued its community involvement by participating in the development of the Lac-Megantic Sports Center, and donating company assembled office furniture.

BESTAR is proud to sponsor Lac-Megantic’s Youth Baseball. The funds were used to purchase equipment for the youngest players (3-7 years old) such as: practice nets, hitting machines, caps and souvenir t-shirts.

How likely are you to recommend Bestar to a friend or colleague?

Not at all likely

What is your main reason for choosing this score?

Back
Thank you for your feedback

This month is jam-packed with unbeatable sales at Bestar! Sign up to this exclusive newsletter to see each daily promotion offered!

Subscribe to our newsletter to stay up to date on our best deals.

New subscribers get 10% off their first order!

Your cart is empty